The adventure activities and tours in Ethiopia are primarily made of the Dallol Depression which is one of the hottest places of our planet, mountainous places where one can trek in Ethiopia's popular and magnificent mountains, and national parks known for their endemic wildlife, flora and fauna.

From gorgeous landscapes to mountains, to rivers, canyons, valleys and endless the contrasts of the country are breathtaking. For the adventurer a multitude of activities are available to choose from. The choice ranges from soft-adventure such as watching game from your vehicle or going on a township tour to adrenaline rushing activities such as hiking. Ethiopia has an endless choices of adventures. Tourists can do adventurous activities into the heart of the wilderness in the Simien or Bale Mountains, they can do their adventurous activities into the hottest place on Earth in the Danakil Depression and they can trek into the famous national parks of Ethiopia. In other terms, the adventurous places of Ethiopia are primarily made up of the Dallol Depression which is one of the hottest places of our planet, mountainous places where one can trek in Ethiopia's popular and magnificent mountains, and national parks known for their endemic wildlife, flora and fauna.

Ethiopia is internationally renowned for its mountainous terrain. Also known as the roof of Africa, the area of the Simien Mountains is one of Ethiopia's most fascinating and diverse regions. 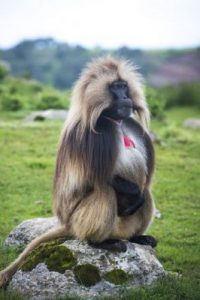 With its 60 km escarpment along the Simien Mountains Plateau and elevation range from 1,900 meters to 4,543 meters above sea level, this place is one of the most popular and magnificent adventurous places Ethiopia has. The 4,543 meter Ras Dejen, in particular, is the tallest mountain in Ethiopia and the fourth tallest in Africa. In his trekking, one can see spectacular mountain scenery including the 4,543 meter Ras Dejen Mountain, the Walia Ibex which is an endemic animal to the park, endemic birds, the Ethiopian Wolf, and the Chelada Monkey.

Chelada Monkeys/Chelada Baboons/: Their relatives began disappearing around a million year ago when the African climate tart to warm and edible grasses began growing only at higher altitudes. Ethiopia's Cheladas maybe about to face the battle of all battles to survive.

Simien Mountains National Park, one of the most beautiful national parks in Ethiopia has a rich wildlife population and a diverse birdlife. The varied landscape makes for a visually exciting safari full of diversity. Here at Simien Mountains National Park, every adventure is a safari. From easy nature walks to off the beaten path mountain trails, the unspoiled Ethiopia is ready for challenges.

The sunny climate of Ethiopia is a definite advantage for those in search of adventure. The Dallol Depression & Erta Ale areas are among the top Ethiopia's adventurous sites where one can do trekking to active or dormant volcanoes and also see the most active volcano in Ethiopia. Erta Ale is centered over the east African rift valley system which is a triple junction setting that results in the formation of a pull apart basin. The average annual temperature here at Dallol Depression and Erta Ale area is 34 degree centigrade with mercury levels. frequently rising above 50. The area is without rain for most of the year and with just 200 mm falling each year, rain is a rare event. Even in the night it's very warm. During the day even if you are in the cold season there is over 40 degree centigrade. For the people and animals of this unearthly environment, everyday life is a struggle to survive. Paradoxically, the are is often referred to as the cradle of humanity. In 1974 Donald Johanson and his colleagues found a famous Australopithecus fossil Lucy which has been dated 3.2 million years old.

The Bale Mountains National Park lies some 400 km south of Addis Ababa, home to the most diverse flora and fauna of Africa and to fascinating indigenous cultures. This national park has been protected with national parks and natural reserves, inviting the guest to explore the unique world of natural places. On most of tours to this national park you will use camping or a lodge as a central hub to explore the surrounding national park. Bale Mountains National Park has everything you would expect from a national park as well; in terms of wildlife. So, adventure travelers will have a chance to visit wild animals as they do their adventure tours in this same national park.
Please contact us to plan your Adventure tours in Ethiopia.